I'm not sure where to begin with this idea, I guess I'll start by pointing out some interesting web pages for streaming content over the internet. In a couple hours I found all these different websites (some I'd heard of before) 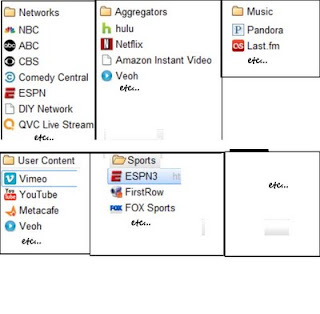 The first thing I noticed is in the networks section, every channel I could think of that we get of on our cable plan has a website that has all the content from the channel. Except online it seems you can watch any episode of the show that ever aired, start it whenever you want, pause and rewind and so on. So that got me thinking about cancelling the cable all together. I'd still need the internet part of the service but not the box or that service.  It seems the content providers are cutting out the middle man of the cable companies except it happens that the cable companies are also the ones providing the internet so not completely.
Not to mention all the other streaming content in all the other boxes. But I feel like it leaves something to be desired first googling for a show to find out where on the internet you can watch it and navigating through each website's different layout to eventually find the episode you want and finally playing it.
So that brings me to my idea, I think it would be nice to have a front end to all this content where you can type in the name of a show and it returns links to the video you want that you can click on and it takes you to the relevant website and starts playing the video. But then I started thinking of more features the front end could have like keeping a list of the shows you like and giving you a notification of which shows had released new episodes and providing links to where you could watch them. So no more having to web surf to every individual site and find the show you like and check if there are new episodes or having to know when they air on TV it would just give you a list of what new stuff was available. I'm still coming up with more features the front end could have but I think you get the idea.
Anyway there's so much content on the internet now but it'd be nice to design a cohesive front end to easily find what you want and perhaps some additional features like I mentioned. I think it would be nice if it worked with a remote. Basically to try and capture what is nice about watching it on cable but with all the nice features that internet streaming provides.
Posted by benpaulthurston at 3:07 AM No comments:

I wrote a computer program that tries to find a Hamilton Circuit , which is given a bunch of "cities" try to find a path that visits every city and ends back up where you start. Each city is connected to some of the other cities with roads. So to start out with your map might look like this: 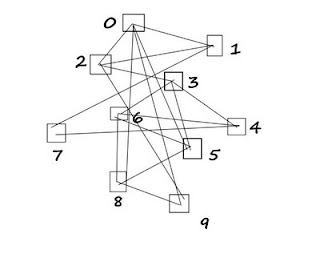 It's kind of a mess, right? You might be able to tell from looking at it the path that solves the problem but it's one of those things that is easier for a human than a computer. So I wrote this program that as step 1 randomly puts these cities on a circle evenly spaced all around. Like so: 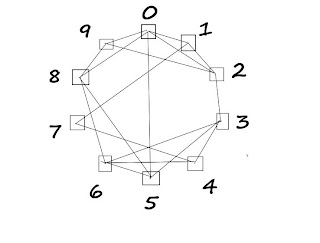 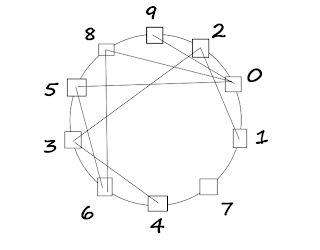 If you start comparing crew or rowing with sumo wrestling...

Muscles
Energy Use
Body Type
Use of Force
The Sumo/Crew Bi-athlete (Guess)
I think it was fun to imagine taking two entirely different sports both specializing in different kinds of abilities and combining the two and see what kind of athletes might be dominant in the resulting sport.
Posted by benpaulthurston at 4:52 PM No comments:

I'm still learning how to use Blender, I made this abstract sculpture to possibly be an earring or a pendent though it could probably be something larger, like a sculpture in a park. I thought jewelry and abstract sculpture were good places to start in learning Blender because of the importance of geometrical form and material properties which are two of the basic concepts in Blender 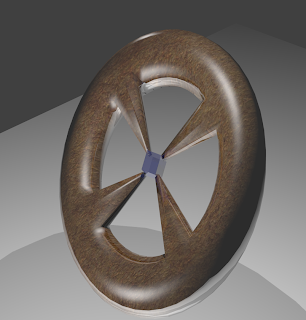 Posted by benpaulthurston at 11:35 PM No comments: 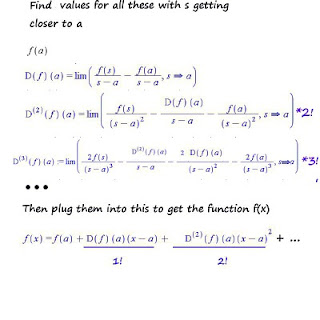 Posted by benpaulthurston at 11:40 AM No comments:

I found an easy way to remember long numbers, first I made a table with 3 columns that going to the right are less and less common letters... 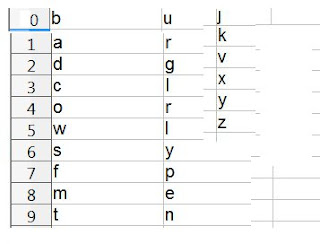 Then find an English sentence that every word starts with these letters.

Could Anyone Own A Wagon That Doesn't Sparkle? Who Could Want Mine That Fails To? Certainly Didn't Cost Much On Sale.  Does Someone Only Care Color? My Cover Doesn't Fit Too Well

And this little want ad and the phrase "Bad Cows FMT!"  (No idea what fmt means maybe a shooing sound?)
will encode 31 digits of pi!
Posted by benpaulthurston at 10:38 PM 2 comments:

video of the last thing in action

The last blog post I talked about a pair of parabolas that go through the same two points. I made this video of the parabolas as the two points each go around a circle one twice as fast as the other.

I used python to draw the individual graphs for each frame and then a program called ffmpeg to make a movie out of all the individual frames.
Posted by benpaulthurston at 11:29 AM No comments:

So I noticed that for every two points there are two functions with 2 as their highest power that pass through those two points. Actually I thought there was only one at first from something I heard before, but there are two. 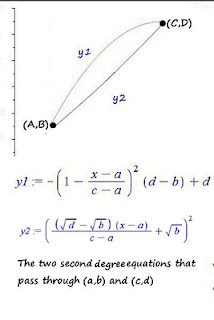 Usually when you approximate a function you have to use an increasing number of rectangles to infinity to get arbitrarily closer to the area of f(x). But what I noticed was the pattern of how you get closer as you keep doubling the amount of rectangles. 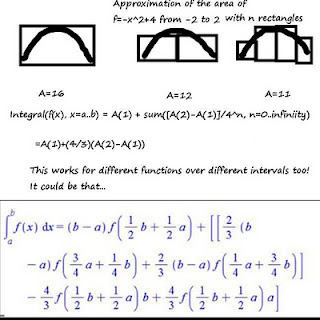 So for the functions I've tried over the intervals I've tried, this formula in blue lets you approximate the integral over an interval using just 5 carefully chosen points and in just a few additions, subtractions and multiplications to get at what before took an infinite number of them. And it gives an exact answer whereas you could only keep getting closer before.
*UPDATE*
Using this formula A(1) +(4/3)[A(2)-A(1)]
to evaluate integral(e^x, x=0..1) gives 1.717776531 instead of the true value of 1.718281828 so it's off a little for exponentials . Seems to work for polynomials though.
*UPDATE2*
It turns out that when it works you only need 3 points' y values to find the integral, over your interval [a,b], you need to know f((b-a)/2), and f of both halfway points between that and the endpoints. Let's say our interval was [2,7] and we measured those 3 points to be f(4.5)=-50.625, f(3.25)=-13.203125,
f(5.75)=-123.984375 after applying the blue formula:
we get: -4475/12
I hid from the formula but I know that these 3 points correspond to -x^3+2*x^2 the integral over that interval of which is:
-4475/12
Using the formula for x^4 +x^2 was off by 7.46, I get 658.666 instead of 666.1333
Still pretty close but I guess it's only exact up to cubics.
*Note That gives me the idea that if you know n points of a given curve, you can find the nth degree polynomial that runs through those (there's a formula for that) then integrate that over your boundaries, this should still be much faster than using an infinite number of rectangles.
Posted by benpaulthurston at 8:06 PM No comments: